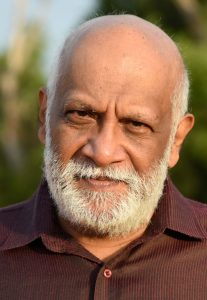 The founder while living in the US, suffered from mild to moderate form of plaque and scalp psoriasis for 26 years since 34 years of age. From steroids to sunlight, he had been through all sorts of treatments available. How this disease devastated the prime of his life, millions of patients would share similar experiences.

He comes from a family of Siddhars (doctors of traditional Siddha medicine).  When he returned to India, this made him spend 3 years traveling across Tamil Nadu in South India, reorienting himself in the traditio

nal medical community and researching the annals to find a cure for Psoriasis. The topical formulation he put together with his Guru, Shri Babu Easwaramurthy, cured his disease in 8 days as he alternated applying this with Clobetasol Propionate every other day. He continues to apply this traditional formulation in the affected areas once a month and there has been no resurfacing of the disease or side effects in 5 years.

He founded COSMAS Arogya Pvt Ltd in India in 2011 and it continues in its commitment to research the traditional medicines for cures of chronic ailments. Several accomplished scientists have joined the company in its mission. Today, the company has a property for the healing of Psoriasis and six other formulations in the pipeline.

In December 2013, COSMAS Arogya was absorbed by Corbanix, a UK based pharmaceutical startup.